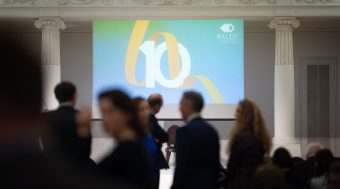 This year marks the 10-year anniversary of the Baltic Institute of Corporate Governance (BICG), since it was officialy established in autumn of 2009, kick-starting a movement towards good corporate governance practices in the Baltics.

“Such a milestone is a great opportunity to thank everyone, who have helped to build the BICG from what was an unlikely, optimistic idea of a few good governance enthusiasts during the hard economic times in 2009, and is a strong Baltic organisation with over 200 members and 700 alumni today. An organisation whose voice has made a difference in improving Baltic business practices, advocating for better governmental policies and is valued internationally,” says Rytis Ambrazevičius, President of the BICG.

Such initiatives of the BICG as increased transparency in state-controlled companies, including improved reporting and advocacy for independent Boards, as well as good governance guidelines for private businesses, are now acknowledged for their benefit in creating better Baltic business environment.

“Today I am particularly glad to see that over the years the Institute has grown to become an organisation more than 200 members strong; one that serves as a solid framework promoting sound corporate governance culture both in the private and public sector. I also commend the active and constructive role that the Institute has played during the accession of Latvia and Lithuania to the OECD. And I applaud its ongoing work at improving business legislation and issuing good corporate governance guidelines both for private and state controlled businesses,” notes Mr Valdis Dombrovskis, Vice Chair of the European Commission and former Prime Minister of Latvia, in his congratulatory letter.

While a 10-year milestone is a good opportunity to reflect on the previous decade, it is also a good viewpoint to look towards the future.

“Looking back at how far we have come and looking forward at how far we still have to go, is an inspiration to keep going. To get to work with new confidence, and ensure that the positive changes that have been achieved do not stagnate or become undone, but continue to progress and  grow into a permanent new corporate governance culture, which cannot be reversed,” says Daiga Auziņa-Melalksne, one of the founders and Chair of the Board of the BICG.